Cameron Diaz is a very famous actor and model, born and raised in California. She first rose to stardom in 1994 after appearing in “The Mask”. Ever since then her career has only been on a rise and she has maintained an A-list status after acting in many movies and earning hundreds of millions of dollars from just acting. Currently fifth in the list of the highest-grossing U.S. actresses, she boasts more than $7 billion of total box office sales. 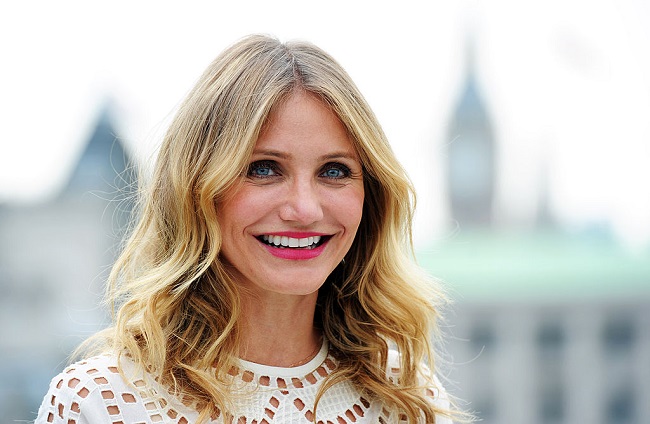 Cameron was born to Billie and Emilio Diaz on August 30, 1972, in San Diego, California. She was raised in Long Beach and attended the Long Beach Polytechnic High School where, interestingly enough, she was also classmates with Snoop Dog.

She has described her upbringing as being “frugal”. She said that “I had amazing parents, they were awesome. We weren’t privileged—very much the opposite. My family would collect soda cans to turn in for extra money because $20 meant something to us. But we were very happy.”

Her father’s family is Cuban and her ancestors had moved from Spain to Cuba. Her mother has chiefly English and German ancestry.Diaz has an elder sister named Chimene.

After her role in “There’s Something about Mary”, she dated her co-star Matt Dillon for a brief time. The next year she began dating actor Jared Leto and it continued for four long years, with them breaking up in 2003. In the same year she was reported to be dating actor and singer Justin Timberlake. They split up in 2007 after four years together.

Diaz finally tied the knot with musician and Good Charlotte founder Benji Madden on January 5th, 2015. It was a Jewish ceremony held at her home in Beverly Hills, California. A close friend and now her sister-in-law, Nicole Richie, had introduced the couple to each other 10 months prior their wedding. They have a daughter who was born in December 2019.

She quickly began modeling professionally at the age of 16. For five years she was featured in many high-profile fashion campaigns and print work while living and working in places like Japan, Australia, and Paris.

At 21, she returned home to California, and despite having no prior experience she auditioned and won the role to star opposite Jim Carrey in the hit 1994 movie “The Mask”. She took her first acting class AFTER landing the role. The film earned a whopping $340 million worldwide and it shot Diaz to stardom.

She starred in more films after that like “My Best Friend’s Wedding” in 1997. A year later she won the titular role in “There’s Something About Mary” which earned $369 million worldwide and brought her her first Golden Globe nomination.

She went on to star in many successful films like “Being John Malkovich”, “Charlie’s Angels”, “Vanilla Sky” (which brought her four honorable award nominations), the Academy Award winner “Gangs of New York”, “In Her Shoes”, “The Holiday”, “What Happens in Vegas”, “My Sister’s Keeper”, “Knight and Day”, “The Green Hornet”, “Bad Teacher”, “Sex Tape”, “Annie” and more.

Diaz voiced Princess Fiona in the much-loved Shrek franchise with Shrek 2 grossing a brilliant $919 million worldwide! In the peak of her career, from 1998 to 2011, Cameron earned $160 million from mere film salaries. She has always earned in double digits for her roles and that is why she is one of the most distinguished actresses in the business.

She retired from acting in 2014 and hasn’t taken up a role in a film or TV series ever since “Annie” in December 2014.She received her star on the Hollywood Walk of Fame in 2009.

Cameron Diaz has a net worth $140 million. Now retired, she easily earned $200 – $250 million just through films at the peak of her career. Her largest salary came from her role in the iconic film “Bad Teacher” in 2011 where the movie earned a total of $210 million worldwide and Diaz walked away with $42 million as her pay alone. Not only is that one of the 20 highest paychecks ever received by an actor, but she is also one of the first women to earn $20 million from a single movie role.

Cameron is and has been the owner of many grand estates around the States, mainly New York and California. She spent $1.34 million for a home above the Sunset Strip in Los Angeles in 2001. While she still owns this property, her primary residence in Beverly Hills is much larger compound that she acquired for $9.5 million from fellow actress Candice Bergen.

Nicole Richie and Joel Madden live in a house only a few block down. Nicole bought this home in 2015 for $6.7 million.Cameron sold a long-owned loft in Greenwich Village, New York for $4 million in 2015. She still has a place of her own in the city though, a $9.5 million condo in Chelsea neighborhood that she bought in 2013.

In 2020, Diaz and Joel bought a new mansion in Beverly Hills for $14.7 million. A grand 9,000 square-foot home with 7 bedrooms and 10 bathrooms sits magnificently on 1.7-acres. It is situated in a gated community on the top of Beverly Hills.

Cameron went from being brought up in a family that valued money, even if it was only a dollar, to earning in millions for every role that she took. Her journey has been only inspiring. She worked hard and is now well-settled and enjoying her retirement with her family.