He is also seen as an investor on ABC’s reality television series Shark Tank. Daymond John is also the founder of The Shark Group. John’s net worth is estimated to be around $350 million. John was also appointed as an ambassador to promote and deserve entrepreneurs by the American President Barack Obama. 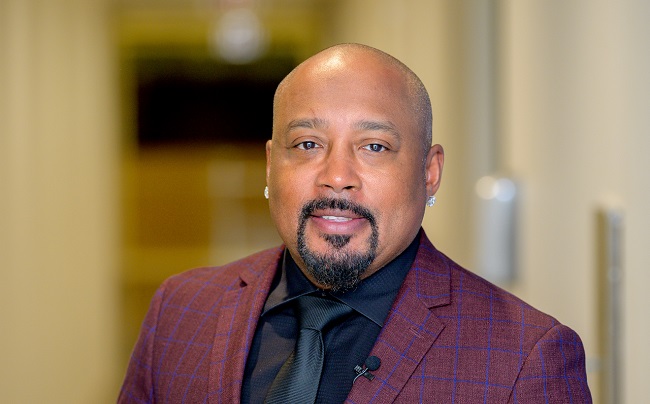 Born on February 23, 1969, in Brooklyn, New York City to mother Margot John and father Garfield John. his parents got divorced when he was just 10. He spent his early childhood years in Hollis. Daymond went to a catholic school for almost 7 years. due to the divorce of his parents, He started working when he was just aged 10 where his job was to hand out flyers for $2 per hour.

When he was in high school he attended a program By which he was enrolled in a full-time job and he has to attend the school on an alternating weekly basis. After high school, he started working as a waiter in Red Lobster and he also started a commuter Van service.

John started his clothing company, FUBU in Hollis when he was living with his mother in her house. FUBU Stands for “for us, by us” when he was 20. The target customers for this clothing brand were young and urban men. John‘s mother taught him how to sew and at a very early stage she was able to say that Daymond has huge potential. They raises $100,000 by mortgaging the house and this amount served as the startup capital.

John Ruskin working full time as a waiter in Red Lobster. His first project was sewing wool ski hats which used to be sold at a price if $20 but according to John, they were overpriced. He sewed them with the help of his neighbor and his future business partner, Carlton Brown.

They sold it at a price of $10 each and made $800 in just a day. Their next project was making screen-printed T-shirts. They sold them on consignments at large events. The two business partners also recruited their friends in the venture. they then began to design hockey jerseys, sweatshirts with the logo of FUBU.

LL Cool J in 1993 wore a FUBU T-shirt for a campaign and he wore a FUBU hat for a commercial for the GAP. it gave them a great boost and their brand got a good image in the market. FUBU was a great success. In just 6 years it started generating $350 million per year in revenue.

To date, FUBU has generated more than $6 billion. apart from FUBU John has also invested around $8.5 million of his worth in Shark Tank. He is also famous for appearing as a judge in the same show. He has also written many books. Some of them are Display of Power, The Brand Within, The Power of Broke, and Rise & Grind: Outperform, Outwork, and Outhustle Your Way to a More Successful and Rewarding Life. Jon is also the executive producer of “The Crow: Wicked Prayer,” a 2005 film.

Daymond John is the brand ambassador of the company Shopify. he is also seen working for entrepreneurs who are budding. He runs an online training program for them as well title ‘Daymond a Demand’. He is also involved in public speaking. He works with big brands and celebrities.

The books written by John can be easily seen on the New York Times and War Street Journals’ bestsellers list. he has won many awards for example NAAPC entrepreneur of the year. He also won the Primetime Emmy award for The Shark Tank.

John has a total of three daughters. Two of his daughters, Destiny, and Yasmeen are from his first marriage. He married Heather Taras in 2018. The couple has a daughter named Minka Jagger.John is dyslexic which means he has a reading disorder. In 2017 he got to know that he has stage II thyroid cancer. He underwent surgery to remove cancerous nodules from his body.

John‘s net worth is calculated to be more than $350 million. His businesses and the shoes you do as a speaker get him a good amount of money and that’s why he’s one of the most successful men in the world.

Daymond John is a jack of all trades. He aces in everything he does from writing books, working as a public or motivational speaker, to building a successful business on his own he is seen winning in his life.