Dennis Keith Rodman is an American former basketball player. He is known as “the Worm” for his defense and rebound abilities. He was named by his mother when she saw him play pinball. He is also a former professional wrestler and an actor. He is 60 years old. He was born on 13th May 1961 in New Jersey, the United States.

As per the records of 2020, Dennis has a net worth of 500,000 dollars. While he had joined the Detroit Pistons in 1987, he earned 160,000 dollars in his first season. By the end of his fourth year, he made around 1 million dollars annually. In 1993, he joined San Antonio Spurs as a forward and won his third rebounding title, and ended up earning 5 million dollars then. 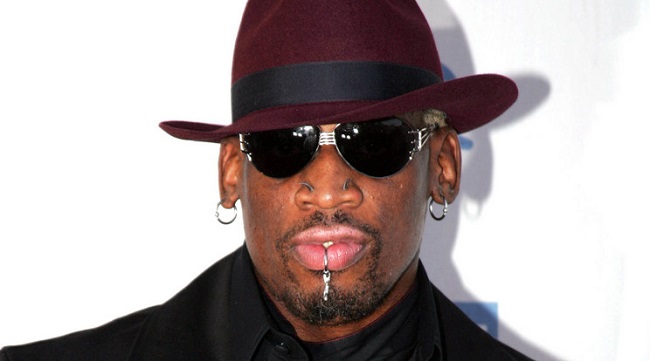 In 1996, he played for Chicago Bulls when he earned 9 million dollars straight in that season winning three titles with Michael Jordan and his team. Rodman has played with various other teams. On the whole, he has earned 27 million dollars in his career in National Basketball Association.

Rodman has two sisters, Debra and Kim. His father had left the family while Rodman was young. His mother had supported them throughout. Both his sisters played basketball and won quite a few medals. They were considered better players than Rodman.

Rodman was transferred to South Eastern Oklahoma State University, he became a three-time NAIA (National Association of Intercollegiate Athletics) All-American and the led rebounding twice. In the year 1986, he led his team reaching the highest ranking in his school history, 3rd rank in the entire nation.

He played for the San Antonio Spurs in 1993. He earned a good name and fame, winning multiple titles. His inappropriate behavior since then has made him face lots of trouble. He was suspended to play, took leave in between. He faced a shoulder injury in a motorcycle accident which led him to miss further matches.

Rodman along with his friend Jack Haley was given to Chicago Bulls under the coach Phil Jackson who made rodman win his next rebounding title. He was a very talented basketball player, but due to his unacceptable behaviors, he was often suspended in matches, and in those matches which he got to play, he got fouls in the early games.

Soon later, he made a choice of diverting his focus towards acting and wrestling from basketball. In 1997, he lost his first match pairing up with his friend Hulk Hogan. He played furthermore matches until 1999. In 1999, he returned to WCW.

In 1996, Rodman ran his own reality show on MTV. The following year, he debuted his first film Double Team. The movie earned him three Golden Rasberry Awards. He also appeared in various television shows. He appeared on the Celebrity Mole show, winning 222,000 million dollars. He became the commissioner of the Lingerie Football League in the year 2005.

He made visits to North Korea several times, which gave him a conventional name for helping conduct a peace summit between Former President Donald Trump and Kim Jong-un in mid-2018. Rodman has released two of his own autobiographies in the year 1996, “Bad as I Wanna Be” and in the year 2005 “I Should Be Dead By Now”.

In the early 1990s, Rodman got married to his first wife Annie Bakes, they got separated soon. They both have a daughter who was born in 1988. He remarried Carmen Electra in the year 1998 and the marriage lasted for four months. In the year 2003, he married Michelle Moyer. They both have a son and a daughter together. Both the children are pursuing their careers in athletics. Dennis Jr. is a basketball player who played college basketball at Washington State in the year 2019.3

Trinity, Radmon’s daughter is playing women’s soccer for the Cougars. Michelle and Dennis had various problems in their marriage, and they decided to get separated in the year 2012. Dennis had drinking problems which got him into trouble. He was sent to rehab in 2018. The following year he again relapsed and refused to go to rehab. In the upcoming years, he reunited with his mother.

Dennis Radmon is one of the finest basketball players. He made his career go through a lot of difficulties. People today still respect him for his abilities. Had he controlled himself in a lot of situations since the beginning, he would have gone more further to make a better successful, and peaceful life.