Julia Louis-Dreyfus, an American actor, comedian, and producer, is acclaimed for her performance in many comedy television shows such as Saturday Night Live (1982-1985), Seinfeld (1989-1998), The New Adventures of Old Christine (2006-2010), and others. She is one of the most praised actresses in the television history of America.

She has a total net worth of $250 million. Julia is not a billionaire at present but it is believed that she will be one someday. Her father owns $4 billion worth of business, which she will share with her stepmom and several siblings. 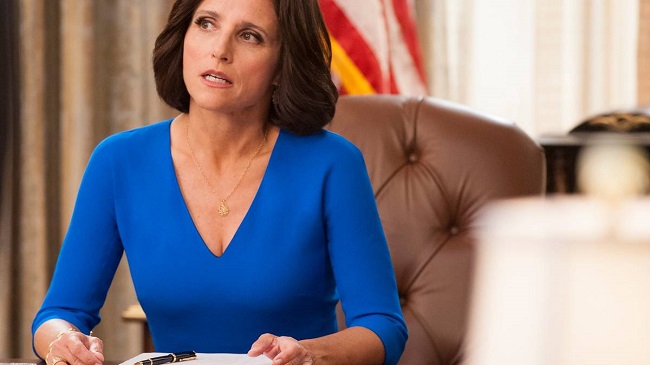 Including all the royalties, inheritance by her father and other real estate, Julia’s net worth will be $1 billion in the future. The Seinfeld actress got paid a salary of $500 thousand for every episode.

Julia Scarlett Elizabeth Louis-Dreyfus was born on January 13, 1961, in New York City. Her mother, Judith was a writer and made her career in the same, she used to teach creative writing. She has written The Gatherer (2014) and Unlocatable Source (2019). Her father, Gerard Louis-Dreyfus inherited the Louis-Dreyfus Company from his father. Her father was also a member of French Resistance during World War II.

In 1962, one year after she was born her parents got divorced. Julia and her mother then moved to Washington, DC. Julia’s mother married L. Thompson Bowles who was dean of George Washington University Medical School when she was four. In 1979, she did her graduation from Holton-Arms School in Bethesda, Maryland. She was President of the honor society in school.

Julia then attended Northwestern University in Evanston Illinois, where she joined the Delta Gamma sorority. She learned theatre and performed in the Mee-Ow Show, a short comedy performance. She then dropped out in her junior year to take her first job at Saturday Night Live in 1982. In 2007, she received an honorary doctor of arts degree from Northwestern University.

Julia got her first breakthrough because of her performance at the “Golden 50th Anniversary Celebration” for The Practical Theatre Company. She was asked to join NBC’s Saturday Night Live cast when she was 21. She was the youngest female cast member of the program at that time. She worked at Saturday Night Live (SNL) from 1982 to 1985, where she met Larry David, who later co-created Seinfeld.

After Julia left SNL she was part of few movies. Later, in 1987 she appeared in “The Art of Being Nick”, an NBC sitcom. But it could not make it further. The director retained her for another sitcom and later she appeared in “Day by Day”, for two seasons before it got canceled.

In 1989, she joined the cast of Seinfeld that led to her popularity and widespread recognition. She was part of every single episode in nine seasons except three, including the first episode of a pilot because her character was initially not part of the show.

From earning a nominal amount at starting to earn $15 million per season for Seinfeld, Julia was among the highest-paid TV actresses. The show ended after nine seasons in 1998, on May 14 becoming the most-watched television event in history with over 76 million people watching.

From 2005 to 2010 she was part of a new sitcom “The New Adventures of Old Christine” playing the title lead. This show earned her the star on the Hollywood Walk of Fame for her remarkable contribution as an actor as well as a comedian.

In 2011, she produced her first show “Veep” in which she was also a lead. She was paid $500 thousand per episode for Veep. The show had received a lot of praise from critics and she also won several awards for it. She debuted as a lead actress in a full-length feature film in 2013 from “Enough Said”.

In January 2020, Julia signed a deal with Apple TV+ for designing and developing new projects as a producer and as a star as well. She also appeared in the recently released Disney+ Marvel Cinematic Universe series, “The Falcon and the Winter Soldier”.

While at Northwestern University she met Brad Hall, now her husband. They both have done work together on Saturday Night Live and also on mini-projects such as a short film, “Picture Paris” and a not so famous show “Watching Ellie”. They have two children together Henry (born in 1992) and Charles (born in 1997). Henry is a songwriter and a singer and Charles is a basketball player.

On September 28, 2017, Julia announced on her Twitter that she was diagnosed with breast cancer, just one day after she won the Emmy award for her performance in Veep. Later in 2018, she announced that she is cancer-free on the “Jimmy Kimmel Live” show.

Through her iconic performances in shows like Seinfeld and Veep, Julia broke several records and earned widespread popularity. She has received a total of 11 Emmy Awards, 8 for her acting across different shows and 3 for producing. She was named as one of the 100 most influential people in the world on the annual “Times 100” list, in 2016.