Tony Robbins born on February 29, 1960, as Anthony J. Mahavoric, in Los Angeles, California, US is known for his motivational speaking and is also one of the #1 New York Times best-selling authors. He is also a celebrity couch and a philanthropist. He is the author of many popular self-help books including Money Master the Game: 7 simple steps to financial freedom (published in 2004) and ‘Awaken the Giant Within’ (published in 1991). 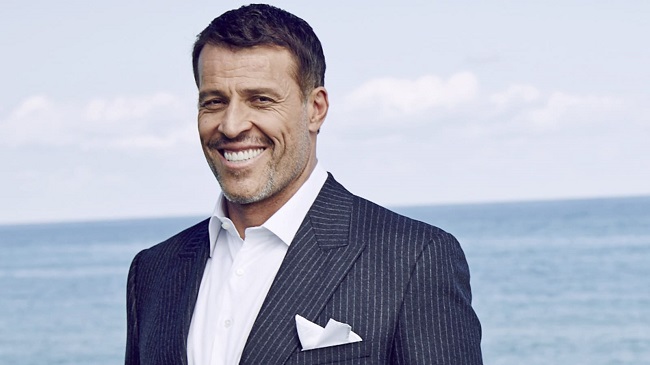 He is famous for his seminars which are organized through Robbins Research International. For more details about his past or future events, you can check out his website https://www.tonyrobbins.com/.

Net Worth of Tony Robbins

Net worth of Tony Robbins as of 2021 is roughly around $600 million. Tony Robbins is the best and one of the well-known faces in his field of motivational speaking. Through his hard work, dedication, and success of his several books, seminars, and podcasts he has grown his empire tremendously.

He was born on February 29, 1960 in LA, California in a middle working-class family, who always had to struggle for money. His parents got separated when he was only 7, and later when he was 12, his mother married Jim Robbins, a former baseball player who then adopted him. He was the eldest among his siblings. He took handyman jobs to help his family.

During his high school, he grew 10 inches due to a pituitary tumor. His childhood was chaotic and full of abuse, he had shared instances of which later through his seminars. At 17 he decided to leave the house and never returned. He then worked as a janitor and did not attend college.

At 17 Tony started organizing and promoting seminars for a motivational speaker, Jim Rohn. After few years in the 1980s, he got partnered with the co-founder of neuro-linguistic programming, John Grinder. He then subsequently learned firewalk and then included it in his seminars.

During one of his interviews, he shared that he made $40,000 in 1984 and his first million in 1985.He released his first infomercial under his self-help program named “Personal Power” supported and produced by Guthy Renker, in 1988. This became extremely successful and millions of copies were sold. Later on, in 1997 he launched his own Leadership Academy seminar.

After that, he co-founded Robbins-Madanes Centre for intervention with Cloe Madanes. In 2014, he acquired the rights to launch Los Angeles Football Club. In 2016, he purchased eSports professional gaming organization, “Team Liquid” that later in 2017 won The International 7 and Dota 2 tournament. After that, he got a chance to work with many famous personalities such as Bill Clinton, Serena Williams, Pitbull, and many others.

In 2007, he was ranked on “Forbes Celebrity 100”. He was named among one of the “Top 50 Business Intellectuals” by Accenture and under “Top 200 Business Gurus” by the Harvard Business Press. His methods had been criticized by many but his following is much more.

Tony Robbins married Rebecca Becky Jenkins, a fellow philanthropist in 1984. Rebecca was already divorced and had three children when she met Robbins. They got married and Robbins adopted her children but had no children of them together.

He had a son, Jairek Robbins with his former girlfriend Liz Acosta in 1984 itself, Jairek is also a personal and self help coach and trainer.Robbins and Jenkins got separated in 1998. In October 2001 Robbins married Bonnie Sage in his resort in Fiji and they live in Manalapan, Florida.

Tony Robbins, from the start of his career by self-help programs to his donations for the Feeding America project. He has always believed in philanthropy. He founded Anthony Robbins Foundation in 1991; with intend to help the youth, the homeless, the hungry, and all in need.

For his Feeding America project, he had donated profits of his books, Money: Master the Game and from Unshakable: Your Financial Freedom Playbook, to feed those in need. Through this project, he had contributed to providing over 100 million meals. He also works with Spring Health, a water company with the purpose of providing fresh drinking water to small, underdeveloped villages in India.

Robbins had also helped in raising the funds for a non-profit organization named Operation Underground Railroad, which works with the government to fight against child slavery and trafficking.

Currently, Tony lives in $25 million lavish mansions in Manalapan, Florida with his family. The mansion has a 57-degree plunge pool, lakeside dock, and beautiful rooms having ocean views. In addition to this mansion, he also has other real estate properties worth millions.

One in Sun Valley and another one in a small town outside of British Columbia, Canada are two properties that he often visits for vacations. He also has a resort in Fiji named Namale which is worth $50 million. Along with these he also owns a private jet, which is estimated to worth around $50.4 million, and a soccer team and a stadium in LA.

Overall if we look at Robbin’s net worth, it is clearly about $600 million. From earning $40 a week to earning not less than a million-dollar per year, this is what success looks like. He had earned a large part of his worth by his books, seminars, private and public sessions all on self-help and motivation.

He also owns a number and variety of businesses ranging from education, hospitality to providing business services and media production. According to Inc. The newsletter, at present Robbins, owns around 31 companies.