With technology evolving every day, it has become relatively easy to make international calls. Earlier to call someone one had to wait for 20-25 minutes for the call to get connected from one coast to another.

In earlier times, international calls were not easily available to the common masses and were a luxury and a novelty.

Since 1969, long-distance calls have not seen much change. Calls get connected to each other via wires and cable, microwave, and satellite. And technology has changes inevitably for good. 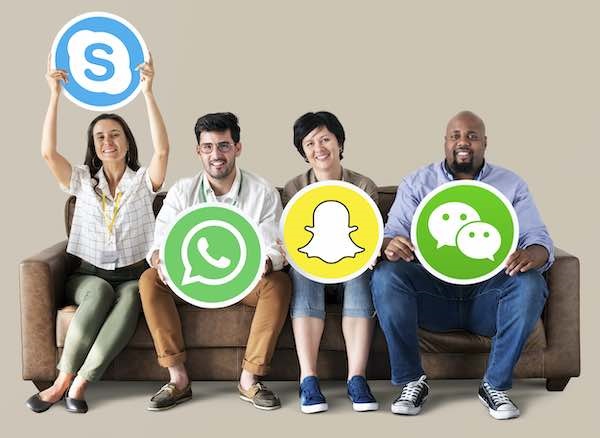 The earth has now become a web of communication lines. You can sit in one corner of the world and talk to someone at another corner.

Not only can you make voice calls and just listen to people’s voices and communicate, but now you can also see them while talking. Video calls have made this possible.

Nowadays, people can connect to each other via international calls for free. Thanks to a number of apps available on our mobiles and laptops.

They have made it even easier for people to connect with each other. A list of apps which allow users to make international calls for free is given below:

Viber is an application operated by the Japanese multinational company Rakuten. It is a cross-platform voice over IP and instant messaging software.

It is available for Android, iOS, Windows and MacOS as freeware.It not only provides its user with the feature of instant messaging but other features as well. Other features include:

According to the 2018 records, there are over a billion users registered on the network.

WhatsApp is one of the most popular and most used apps around the world. It is also a VoIP and is owned by Facebook. It provides the following features to its users:

Any file with the maximum size of 100MB can be shared through WhatsApp. It has recently released a standalone business app which targets small businesses, called WhatsApp Business.

Companies can now communicate with their customers who use standard WhatsApp, directly.

FaceTime is an in-built application for Apple users to make video calls. It is supported on iOS mobile devices running iOS 4 and later and Mac computers that run Mac OS X 10.6.6 and later.

It is only available on Apple devices. As for non-Apple users, well you have to switch to Apple to use FaceTime. The only requirement to use FaceTime is a strong WiFi connection or network data.

Skype is a telecommunication application that provides features like video and voice calls over the internet.

It is accessible on a computer, tablet, mobile, Xbox One console and smartwatches. Like Viber and Whatsapp also provides similar features of sending text message.

Another feature of Skype is that it allows users to make conference video calls also. International skype to skype calls are free but skype traditional phones may cost you some money.

It is available on Android, iOS and Windows phone. IMO is the only app that supports international calling in 2G also.

So even if you live in an area where the internet is not very strong, making international calls won’t be a problem.

The voice calls in IMO are encrypted so security is not much of a concern here. It was recorded that IMO had over 500 million downloads on Android.

Other apps only allow you to make international or regular calls only if the other person is also using that app. What makes PopTox different is that you can call people even if they use PopTox.

But only regular calls or landlines calls are available. And it’s FREE to use! But only a limited number of calls can be made during a day.

The only requirement is an internet connection. Also, if you wish to make calls beyond the given limit, you will have to pay by the minute.

Line is another freeware app for instant communications. It is operational on smartphones, tablets and personal computers.

Video conferences are also available online.
Line also offers coupons to its users. They can also read the news on LINE.

Tango is a third-party cross-platform messaging application software. It is only available on smartphones and can operate in both Android and iOS.

Features available on tango are:

All these features can be used even with 3G networks. It was rated as the “simplest mobile application out there with a good range of support” by PCMag.

Tango is available for free in limited countries only, including the United States, Canada, Mexico, India. To make calls to other countries there is a nominal fee but it is very cheap.

It is a free program that gives its users free, high-quality video communication regardless of the location. It can be used on a computer, mobile device or a fixed phone.

The software itself is free but calling rates and SMS rates vary depending on the location. Free calls are allowed only up to 60 minutes, after that it charges some amount according to minutes.

But this rate is quite low. Therefore, it makes the software very affordable.
The only thing that differentiates it from other apps is that it does not allow text messages and video messages.

Google Voice is a telephone service that provides call forwarding and voicemail services.

A United States telephone number is chosen by the user from available numbers in selected area codes, free of charge.

At the moment, Google Voice’s PC to phone calling works only in the United States and Canada.

Almost all the above-given apps require a 3G network connection. These calls are made over the internet and not through your regular phone lines.

This has made calling internationally very easy and affordable. They have brought the world closer.

In times like the Covid-19 pandemic when everyone got locked in their homes and some away from their homes.

These apps proved to be a blessing to everyone and helped them stay connected to their loved ones.

Everything has shifted virtually and international and national video calling with the help of these and many other such apps made virtual parties, gatherings and weddings a thing.

We realised how well technology has advanced and how useful it is. We can always stay connected to your dear ones with these apps because everyone is literally one call away!